Why Use amethyst in the biomat? 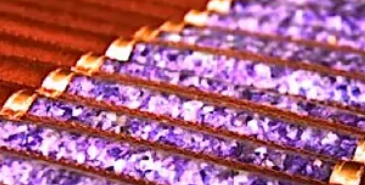 The entire face of each Richway Amethyst Biomat is made up of channels that hold amethyst.  This is so that the far infrared rays generated by the Biomat must pass through them before getting to you.  The reason for this is simple. The amethyst takes those far infrared rays, elongates them and sets the vibrational frequency to one that is best absorbed by the human body.  Amethyst amplifies the FIR coming from the Biomat 200 times and transfers them to you.  This guarantees that the far infrared rays and negative ions reach up to 7 inches into your body.

Once inside the body, the far infrared rays produced by Biomat technology are intensified by the amethyst while at the same time set at a natural vibrational frequency that turns to heat and warms you from the inside.  This vibrational heat resonates within the body and can detoxify and heal the body in a fundamental way. The far infrared rays normalize the body's cells, increasing blood circulation, encouraging perspiration, eliminating toxins, relaxing muscles and promoting the immune system.

The history of healing using amethyst

For thousands of years, healers have been using amethyst as a healing tool.  The ancient Greeks, Romans and Egyptians all prized it for it's healing properties, known throughout the world as a natural tranquilizer and treatment for all sorts of illnesses and health issues.  The Romans used it as a remedy for alcoholism and universally, it has been used as a hangover cure.

But more widely throughout human history, amethyst has been used as a remedy for depression, sleeplessness and especially anxiety.  For millenia, people have looked to amethyst to calm their worries and stress and to realign their focus.

More recently, a portion of the scientific community believes that amethyst aids in the use of light when it comes to human health, making it nature's transformer and superconductor. Amethyst transforms the lower vibrations of light into higher ones.  Amethyst amplifies far infrared light into longer waves which are then more easily absorbed by the human body, acting as a superconductor between FIR and body tissue.

Do you think it's a coincidence that history and current research match up?  Take a look at what ancient civilizations used amethyst for and then look at what the Richway Amethyst Biomat is known for doing.  This is no coincidence.

- As a preventative for alcoholism

- As an enhancer of meditation and spirituality

- As a sleeping aid

- As a metabolism booster

- As an immune system booster