HOW THE BIOMAT WORKS

The Biomat combines three powerful healing elements into one medical device.  The long far infrared light waves provide the ability to penetrate the body up to six inches and produce a warming, vibrational energy at a cellular level.  The negative ions that the Biomat generates fill the air around you, re-charging it with what pollution has robbed from it and acting as an antioxidant.  And finally, all infrared products contain some sort of crystal to conduct the heat into far infrared light because they do it the most efficiently, but Richway only uses the best quality amethyst, which is natural super conducter.  Combined, these three elements of the Biomat are what make it not only unique in the infrared product category, but also the best investment you can make for your body and mind.

The Biomat: The Construction of healing perfection 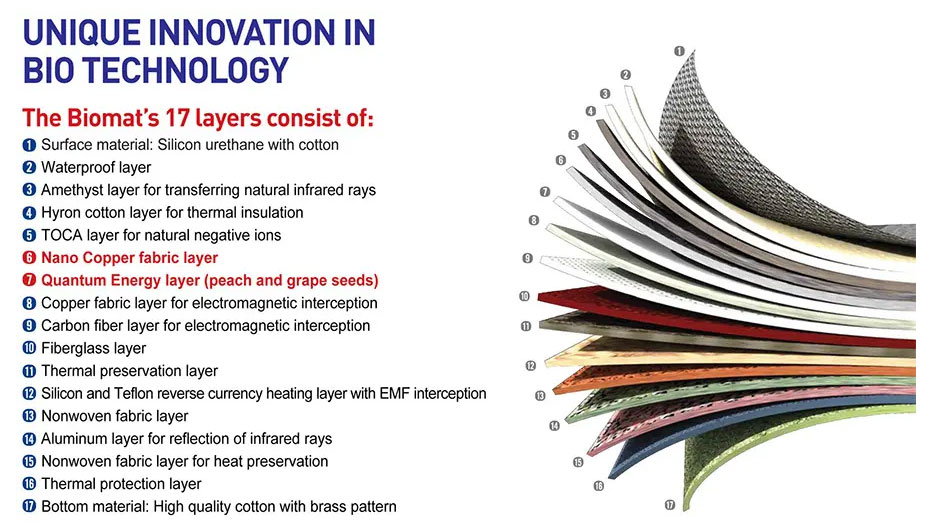 EMF (Electromagnetic Fields): Are they harmful and how am i protected on a biomat?

Low-level non-ionizing EMF are emitted by all electronic devices. In the 1990's, with the rise of cellular phones and other electronic devices, studies were done to see if the electromagnetic fields generated by such devices were harmful to our health.  The conclusion of those studies showed a very weak correlation between low-level non-ionizing EMF and childhood leukemia, but other than that, it was concluded that there is no risk to our health.

That being said, better safe than sorry.  So Richway has gone to massive lengths to make sure that when you are lying on a Biomat, you are protected.  If you refer to the image above, you will see that Richway has two layers of the Biomat dedicated to preventing them from ever getting to you.  If you refer to the image below, you will see that Richway has also put a safeguard into the Biomat's controller.  The EMF interceptor in the controller conducts the EMF into the ground before it ever leaves the Biomat.  This innovation is unique to the Biomat and not it's competitors so you can feel completely safe using it.

The Biomat 7000mx controller's features include: a timer, temperature controls, a far infrared ray indicator, an alarm light in case of malfunction and an EMF interception light.  The Biomat controller has an advanced IC chip that protects you from electromagnetic field waves.  Unlike conventional heating pads, Biomats do not heat up to the temperature set.  The Biomat, even on high temperatures, will feel warm, but not hot.  Far infrared rays permeate the tissues of the body and warm you from the inside so the temperature setting is for the temperature you want to feel internally.  This is why Biomats have never been a fire hazard like heating pads and electric blankets. 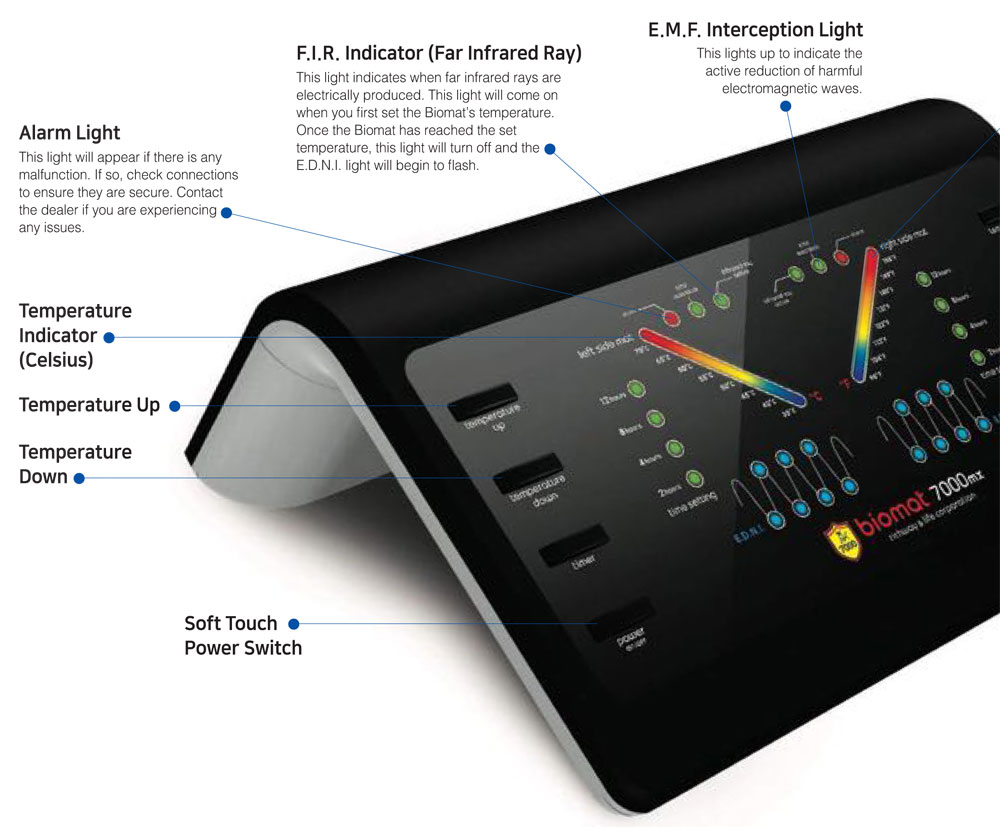 25 years of research, development and innovation: the richway biomat