The National Institute of Health says that visceral fat around the abdomen as we age is a public health problem. The Richway Biobelt 7000mx uses far infrared rays (FIR) to generate heat inside the body just like the Biomat.  In fact, it is the same exact technology with a twist.  Instead of just amethyst, the Biobelt has eight different crystals with different healing properties that when heated, penetrate the abdomen (or wherever on the body it is used) and warm it, providing detoxification and helping to reduce body fat.

The Biobelt is also great for back pain, muscle pain, arthritis pain, muscle spasms, joint pain and increased circulation and is FDA approved for relief of these symptoms.

Included with the Biobelt 7000mx:

The Biobelt 7000mx is the newest member of the Biomat family.  It uses EIGHT different stones to generate far infrared rays (FIR), invisible light that penetrates the body and provides a gentle, healing warmth that results in health benefits.  The biobelt also produces negative ions that replenish the air around you, making it healthier to breathe.  Negative ions are negatively charged molecules that purify oxygen and are what you notice when you go out into nature, like to the beach or the mountains.  With the biobelt, you have more freedom to move around while using Richway's FIR technology.  It has an extra long cord so that you can stand and walk around.  The other benefit to it's design is that it targets specific areas of the body and the belt keeps the therapy just where you need it!

NOTE: THERE ARE NO LONGER TWO SIZES TO THE BIOBELT.  RICHWAY HAS ENLONGATED THE BELT STRAP TO BE ONE-SIZE-FITS-ALL AT A MAXIMUM LENGTH OF 58.5 INCHES. 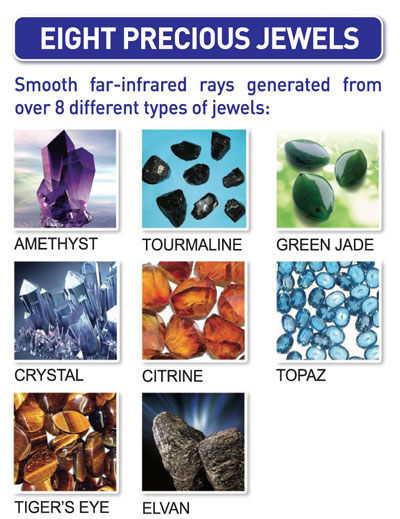 The Eight Stones of the Biobelt 7000mx

Amethyst - If you've been looking at Biomats even just a little, then you already know that amethyst is nature's tranquilizer, but it is also nature's best conductor of far infrared rays.  Amethyst amplifies the infrared rays the Biomat generates by 200 times.

Tourmaline - produces negative ions and far infrared rays.  Tourmaline is known to be the crystal that emits the most negative ions. Known throughout history to be the stone that calms emotions and increases focus.

Green Jade - produces far infrared rays and negative ions.  Known throughout history to be the stone of peace and serenity.

Citrine - produces far infrared rays.  Most citrine is formed by heating purple amethyst.  It is known as the stone that alleviates depression, increases optimisim and relieves digestive issues.  Known as the "Light" stone as it was thought that citrine could hold sunlight to the ancients.  They weren't wrong.  Citrine captures certain wavelengths of the electromagnetic spectrum and releases them when heated, including far infrared light.

Topaz - produces far infrared rays.  Known as the stone of good fortune and love and for directing energy where it needs to be.

The Biobelt 7000mx from Richway uses the same technology as the Biomat.  The difference is that it can be strapped around you using the velcro belt and has a longer cord so mobility is possible.  The other difference is that eight different stones are used, including Quartz, Tiger's Eye, Amethyst, Tourmaline, Citrine, Green Jade, Topaz and Elvan.  Each stone brings something to fight against stress, pain and weight gain.